Tesla may be heading to Texas, but here’s why the Bay Area is a still a center for EV tech

Tesla may be heading to Texas, but here’s why the Bay Area is a still a center for EV tech 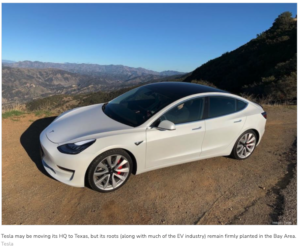 First off, the news: Tesla has officially announced it is moving its headquarters from Palo Alto to Austin, Texas. The decision has led to a lot of hand wringing among economic development types about familiar narratives about the exodus of companies leaving the Bay Area and the decline of the region as a center for the burgeoning electric vehicle market.

A counterpoint? The Bay Area still functions as a still major hub for nearly all parts of the industry ranging from manufacturing to components to research, and the state itself is one of the major forces in making electric vehicles a leading industry segment.

It’s still unclear if Tesla (NASDAQ: TSLA) intends to completely shut down its Palo Alto office, with the city’s mayor characterizing the move as “just a business registration change.” What is certain is that the company will continue to have a strong presence in the Bay Area. The company said it would continue its Fremont factory operations and actually intends to expand production at the site by some 50%.

On Friday, Governor Gavin Newsom weighed in on Tesla, touted the state’s status as an economic engine and took a jab at Texas in the process.

“I was encouraged to read about Elon’s commitment to increasing production in California by 50%. That would mark a headline in any other traditional day,” Newsom said at a press conference. “I also am proud that California is the fastest growing economic jurisdiction in the world over the last five years. In fact we’ve grown at 21% GDP. We have outpaced all Western Democracies. Germany, Japan, the United States. And substantially outpaced Texas. With respect to Texas, they’ve grown at 12% GDP in the last five years. California? 21%. Not even close.”

Last year, Newsom signed an executive order banning sales of new gas-powered cars in the state by 2035, and the state has launched incentive program to help lower-income residents switch to hybrid and all-electric vehicles. Eligible Bay Area residents can apply to receive up to a $9,500 credit through the Clean Cars For All program.

The headquarters move was little surprise to those who have been watching the news. Elon Musk has quarreled with local officials, most infamously during the early months of the pandemic when he called California’s public health shutdowns “fascist,” but again Tesla still has strong ties to the Bay Area. Part of the reason is that its Fremont factory is located less than 300 miles from its battery factory in Sparks, Nevada. By comparison, its newest factory under construction near Austin will be 1,700 miles away. His other two companies, SpaceX and the Boring Company, also have a presence in Texas (and he noisily changed his residence to the state last year) so it’s plausible that Musk is simply consolidating in the state and turning it into a regional Tesla hub.

Closer to home, there are more than 200 companies based in the Bay Area working on all things electric vehicles, according to LinkedIn. Here are 12 notable ones now that the top dog is skipping town.

NEED TO LEASE A BUILDING? Learn About Leasing Services
We use cookies on our website to give you the most relevant experience by remembering your preferences and repeat visits. By clicking “Accept”, you consent to the use of ALL the cookies.
Cookie settingsACCEPT
Manage consent

This website uses cookies to improve your experience while you navigate through the website. Out of these, the cookies that are categorized as necessary are stored on your browser as they are essential for the working of basic functionalities of the website. We also use third-party cookies that help us analyze and understand how you use this website. These cookies will be stored in your browser only with your consent. You also have the option to opt-out of these cookies. But opting out of some of these cookies may affect your browsing experience.
Necessary Always Enabled
Necessary cookies are absolutely essential for the website to function properly. These cookies ensure basic functionalities and security features of the website, anonymously.
Functional
Functional cookies help to perform certain functionalities like sharing the content of the website on social media platforms, collect feedbacks, and other third-party features.
Performance
Performance cookies are used to understand and analyze the key performance indexes of the website which helps in delivering a better user experience for the visitors.
Analytics
Analytical cookies are used to understand how visitors interact with the website. These cookies help provide information on metrics the number of visitors, bounce rate, traffic source, etc.
Advertisement
Advertisement cookies are used to provide visitors with relevant ads and marketing campaigns. These cookies track visitors across websites and collect information to provide customized ads.
Others
Other uncategorized cookies are those that are being analyzed and have not been classified into a category as yet.
SAVE & ACCEPT